Dogue de Bordeaux or French Mastiff: what kind of a dog is this? (12 photos)

Dogue de Bordeaux, also known as French Mastiff, is quite an ancient breed that has been known in France for centuries, although the breed only got its official name in the 19th century. For centuries these dogs have been used for various purposes such as hunting partners, guarding dogs at farms and homes, herding and protecting cattle. Like other mastiffs, Dogue de Bordeaux took part in the war, helping carry the wounded off the battlefield.  They were also used in dog fighting and pit fighting against other animals such as bears or bulls. 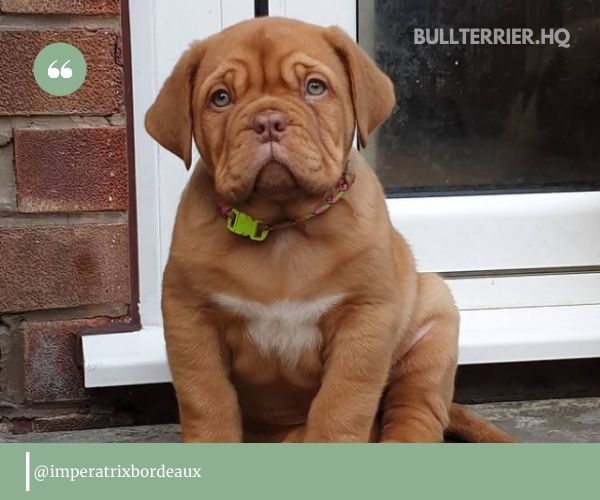 Today, Dogue de Bordeaux is popular not only in France but all over Europe and is starting to become more widespread around the world.

According to the AKC standard, Dogue de Bordeaux, like other mastiffs, is a large, muscular dog with a proportionate body and large square looking head. The body is large and thick, but they are not very short. This is a very athletic dog.

The males can easily reach 68 cm in height and over 100lbs in weight. The females are smaller at 66 cm tall and around 90 lbs.

Dogue de Bordeaux, like other mastiffs, is a large, muscular dog with a proportionate body and a large square looking head

Like other mastiffs, these dogs have large and strong jaws and very large teeth. The eyes are oval-shaped and wide-set, giving French Mastiff their characteristic look which is quite different from other mastiffs.

The ears are usually small and drooping. The neck is thick, almost as thick as their head. 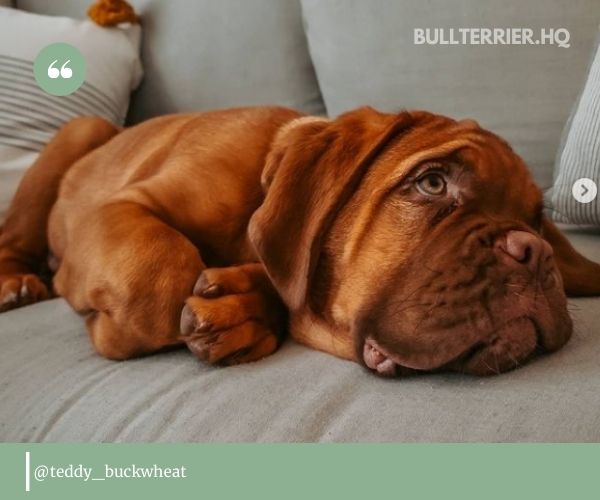 French Mastiff has a wide and deep chest that goes as low as their elbows.

Overall, Dogue de Bordeaux is a muscular, well-shaped, and impressive-looking dog whose physical forms fully fit its purpose as a working dog. But French Mastiffs are not only valued for their looks. Their personality is something that stands out as well! 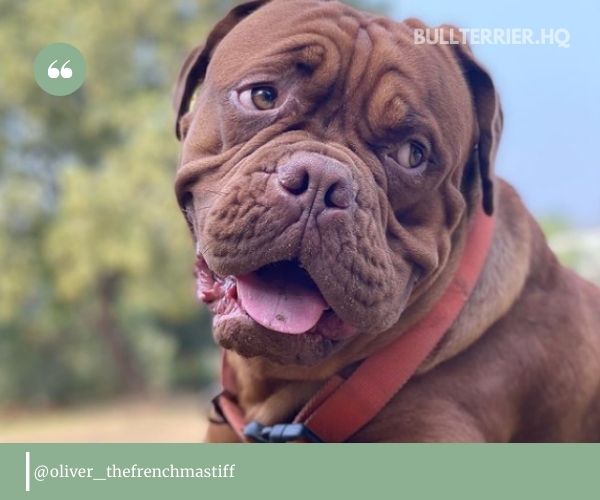 Dogue de Bordeaux is a great guard dog, capable of protecting not only you but your property as well, unlike some other mastiff types. A lot of mastiff breeds have been slowly losing their protective instincts through purposeful breeding: dogs with weaker guarding instincts are easier to raise and handle, and especially to show at dog shows. This is why a lot of mastiff types are less capable of being effective guard dogs. But this is not so with French Mastiff: their instincts have not been diluted through breeding and they are still very much capable of being reliable and dedicated protectors. 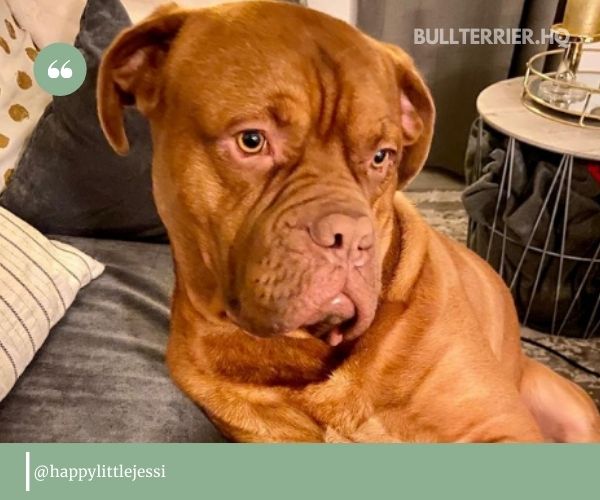 Despite having a strong guarding instinct, French Mastiff is not aggressive, not without a strong reason. They usually have a very stable temperament and are very patient. It’s not that easy to annoy them or make them angry. This makes it a very good dog for families, especially families with children.

The calm, stable demeanor doesn’t mean your Dogue de Bordeaux is not a fighting machine if they (or you!) get threatened or attacked. They will certainly react if they are being provoked or truly threatened, and they can be very effective in stopping an aggressor. They are good at protecting people as well as property which makes them an excellent guard dog for farms and homesteads.

When training your French Mastiff it is important to emphasize preventing aggression towards other people and animals outside of situations when you are being threatened or attacked. Unprovoked aggression is rare in Dogue de Bordeaux but if it does arise it needs to be dealt with immediately so that the dog learns it is unacceptable. 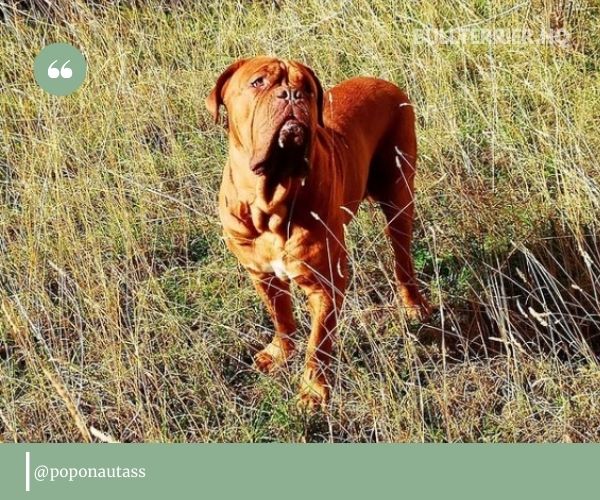 One downside of French Mastiff’s character is that they can display dominance towards other dogs, especially male French Mastiff. If you already have another male dog, getting a Dogue de Bordeaux male can be problematic as you may have to deal with constant fighting for dominance. Your French Mastiff may also display aggression towards other male dogs they may encounter during walks etc trying to establish their dominance. This is preventable to a degree through training but may not be fully stopped, depending on an individual dog. If you feel that you are not up to the task of controlling dominant urges in your Dogue de Bordeaux, you may want to get a female and not a male.

French Mastiff is very intelligent. They are self-confident, self-reliant, and independent and can be even a little stubborn.

If you are thinking of getting a French Mastiff, keep in mind you will need to budget for proper nutrition. This is a large dog. They eat quite a bit and they need high-quality food to maintain that big muscular body in great shape. Without proper nutrition, any dog, but especially a large one, can get sick.

In which case you will have to budget for vet costs! Feeding your dog right is the best way to go! A combination of wet and dry food (mostly wet!) could be a good option for feeding your Dogue de Bordeaux. It’s always a great idea to add some fresh meat to the diet. Be careful about adding supplements: always consult with a vet before adding any types of vitamins/minerals to your pup’s diet.

Dogue de Bordeaux is generally a fairly healthy breed. Like all large dogs, they tend to live slightly shorter lives than smaller dogs. Their average lifespan is around 8-10 years. They do have some breed-specific issues such as heart disease and epilepsy. They also tend to have hip dysplasia a little more often than other breeds.

Allergies are also quite common with this breed. The most common symptoms of allergies in French Mastiffs are dermatitis, itchiness, red spots, and stomach issues such as diarrhea. Most allergies stem from your dog’s intolerance of a certain food or certain brand of kibble. Careful experimenting may be needed to find out what food/ingredient makes your dog allergic. Avoiding allergens is important to keep your dog from having reactions.

A good way to keep your dog healthy is to provide it with sufficient exercise daily. Dogue de Bordeaux are active dogs that enjoy exercise and time send outdoors. Remember that they are sensitive to heat and will not do well when it’s too hot outside. They also don’t need too much exercise. A lot of French Mastiffs can suffer from shortness of breath when they get overly active. You won’t be able to take your French Mastiff to climb up a mountain or follow you while you are cycling. But leisurely walks and some games in the park is just what they need.

You can also read about Cane Corso: Italian mastiff at its best