Bullmastiff temperament: a vigilant protector with a kind heart 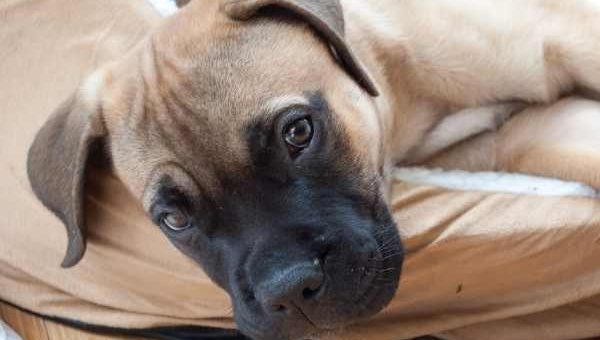 Bullmastiffs are becoming more and more popular as more people get acquainted with Mastiff breeds in general and Bullmastiffs in particular.  Apart from their unique looks, Bullmastiff temperament is no less unique and that’s why they are so valued by dog lovers all over the world. But is it a good dog for you and your family?

Bullmastiffs have been known since at least the 15th century: they have been mentioned in several historic books as a “powerful” cross of bulldogs and mastiffs. At that time, bullmastiffs were used as guard dogs to protect people and their property. One particular function Bullmastiffs served was accompanying gamekeepers who had to stand against poachers in the woods of Europe. Pouching was the way to survive for many people, so gamekeeping was a difficult and dangerous business.

The dogs – large, intimidating, devoted, and possessing excellent guarding instincts – gave a good measure of protection and helped the gamekeepers to do their job. Bullmastiffs were able to track the criminals in complete silence, detain them successfully, and protect the gamekeepers when they needed protection (which was often.) Another distinct quality that made these dogs such good working dogs was their full obedience to the owner.

In the 19th century after the war in Europe and the great depression in the US, Bullmastiffs were no less popular and continued to be used as guard dogs.

In all situations, mastiffs were loyal, dedicated, and extremely helpful to people. This is truly a breed that deserved the admiration and love of dog lovers all over the world. One of the 19th century Bullmastiff lovers said in his book: “If you want to purchase infinite loyalty and love, purchase a Bullmastiff”. Loyalty and full devotion are some of the best traits of Bullmastiff’s character that seems to be natural and genetic in Bullmastiffs.

This is how The Bullmastiff standard characterizes this dog’s temperament. Bullmastiffs are confident and strong dogs mentally, extremely vigilant, and reliable. They are dauntless, very intelligent, and always ready to follow their owner’s commands.  This is a perfect family guard and protector. All of these traits are truly what makes the Bullmastiff a wonderful dog we know today.

The traits that define Bullmastiffs are their infinite courage, ability to make quick (and correct) decisions, and their constant vigilance. These traits are a natural result of cross-breeding some of the most successful guarding and fighting dog breeds out there (bulldogs and mastiffs, and some other bloodlines that were added throughout the long history of Bullmastiff breed development).

Although in the past few decades mastiffs are not used the way they were used at the dawn of the breed history, it doesn’t mean that their excellent personality traits and capabilities aren’t there today. However, today’s breeders work hard on not allowing any aggressiveness and dominance to proliferate in their litters, because, let’s be honest, there is no place (and no need) for it in our society.

Bullmastiffs can be called somewhat introverted. They are not happy-go-lucky dogs that will be happy to meet any stranger. They adore their families and want to always be around their people. But they are not so outgoing with strangers – this breed was never supposed to be overly social. They are not aggressive towards strangers either. They are simply indifferent and very vigilant among people they don’t know. They like to keep their owners and their family in their sight, protecting them from any ills. But a well-behaved Bullmastiff will not attack a stranger without a reason.

Bullmastiffs are normally quite silent dogs – they will not bark up a storm for no reason. They will bark, of course, if there is a real danger to them or their owner, or if a stranger is trespassing and not willing to walk away. In most cases, a concerned Bullmastiff will spend some time watching the situation before they make a judgment about it and decide to bark/threaten.

They see far, have excellent hearing and an even better sense of smell, and can be surprisingly good at following their intuition when it comes to evaluating the level of danger that you or your family may be in. A Bullmastiff is unlikely to attack your friend or neighbor, although, of course, as with any dog, you need to keep precautions in mind and not let your dog wander around the block uncontrolled.

Bullmastiffs can be extremely loving and attached to their families. They absolutely need and require to be intimately close with their family, to spend lots of time together (preferably all the time!), and to never be separated from their humans. They will follow you everywhere you go. Their favorite place will be right at your feet, wherever you are.

When their need in contact with their owner is satisfied, a Bullmastiff will feel happy, content, and excited. To such dog, any withdrawal of attention/closeness is enough punishment if they do something wrong that they will very well understand they are being punished and will never want to do it again. There is nothing worse for a Bullmastiff than being rejected by their owner.

When picking out a puppy, an inevitable question you are going to be faced with is whether you should choose a boy or a girl. How are the two genders different, if at all? Although it may really vary from dog to dog, females are a little easier to own and handle than males. Males can become quite territorial and potentially aggressive to other males after they reach full maturity.

With females, these issues will be less common. Spaying and neutering may mitigate the difference to smaller or larger degree depending on the individual dog. Males are also slightly larger than females. On the other hand, females can be slightly less devoted to the owner and be a bit more “individualistic” and moodier than males who generally prefer the company of their humans at all times.

Another feature that’s significant about Bullmastiffs and is a perfect combination of both their physical and emotional traits is their high endurance. If motivated enough, these dogs can be literally unstoppable whether they are tracking a criminal or fighting off another dog/animal. Their superior physical strength and their inborn stubbornness can make this a very effective and even dangerous dog depending on the circumstances. This is why training your Bullmastiff is so important.

At the end of the day, every Bullmastiff is their own PERSON. These dog’s personalities are what is most attractive about them. They are confident, a little introverted but loving, like to make their own decisions and can seem somewhat condescending. That’s just because they are so confident.

A well-raised and well-behaved Bullmastiff will never pull the lead or bark at another dog like mad. That’s below their dignity! In fact, they hardly ever attack first or provoke an attack from others. But if another dog displays aggression and dares to come close to a Bullmastiff, the consequences can be severe.

The Bullmastiff will almost always manage to do the first strike, even if they weren’t the original aggressor. Their physical strength and speed of reaction are unparalleled. There might not be an actual fight: the first blow is usually enough to cool the aggressor down and make them retreat (and probably never approach another Bullmastiff again).

Due to their natural, inborn tendency to be extremely vigilant, Bullmastiffs are one of the best breeds out there for guarding and protecting work. Apart from constant vigilance, their natural instincts help Bullmastiffs make quick and correct decisions when the safety of their family is at stake.

They are very watchful and always see what you think and feel about a person, and react immediately if you feel intimidated or if they feel you are threatened. At the same time, Bullmastiffs don’t tend to overreact.

They will display only as much aggression as the situation requires. If you are only threatened but not attacked, a Bullmastiff will only threaten in return. They are not bloodthirsty monsters and will not lash out just because they can – that is, of course, if your Bullmastiff is well trained. Bullmastiffs were bred specifically as a guard dog that had to act silently and carefully, and fairly independently. They never get overly excited or too emotional.

They are one of the more cold-headed breeds that are very rational in the way they go about things. Unlike some other guarding and fighting breeds that may have an unstable temper and get overly excited in action, you can trust your Bullmastiff to stay calm at all times. They never get carried away even in the heat of action. This is a wonderful trait that you won’t find among many breeds.

When it comes to their family, Bullmastiffs are never dominant and do not fight for their place in the hierarchy. This makes them a safe family dog that will not lash out at your kid for getting into their food bowl or for occasionally being climbed on.

Due to being bred to be “quiet” protectors, you won’t have issues with neighbors complaining about your Bullmastiff barking excessively since they hardly ever bark at all.

Like many other large dog breeds, bullmastiffs take a while to mature. They can still act childish at 2-3 years old, after which their personality actually starts to set in. Before that time it’s important to work with your Bullmastiff on any character traits that you may not like in them and fix that while they are still quite pliable.

Bullmastiffs do not like familiarity with strangers. They will not be happy if a stranger comes to pet them and can growl or retreat from such impolite behavior. This is usually true for adult strangers, whereas your Bullmastiff will probably be OK with kids petting them as they are quite patient towards children. Still, it is a good idea to not let any stranger regardless of age come and pet your Bullmastiff without making sure your dog is equally excited about it.