We “inherited” our Bullmastiff Great Dane Mix Teddy from a relative when he was still quite young, around 8 months old. So not exactly a puppy, but not an adult either. We see him as our dog since the beginning, and he is almost four years old now.

This is a large dog, and he was quite large even when he was still a puppy, so of course, we were a little intimidated at first. But he turned out to be the most loyal and smartest dog out there and he is totally worth every effort and every moment of care that we have to give him.

I must say our Bullmastiff Great Dane Mix is a very stubborn dog. I don’t know about all of them, but stubbornness is definitely Teddy’s second name. He is extremely smart, and so when we tell him to do something (a command) he knows very well what we want. I can see it in his eyes! It’s just that he will think twice before doing anything, including what he is told to do!

“Why should I do it? How would that benefit me? What will I get and do I need that at all?” Those thoughts are literally written on his face when he is considering following a command or not. It’s hilarious on one hand. On the other, sometimes we just really need him to do something (like hop in the car because it’s time to go home) and because he is so large, it’s really hard to force him to do anything. We are still working on finding ways to better motivate him to do what we want him to do. 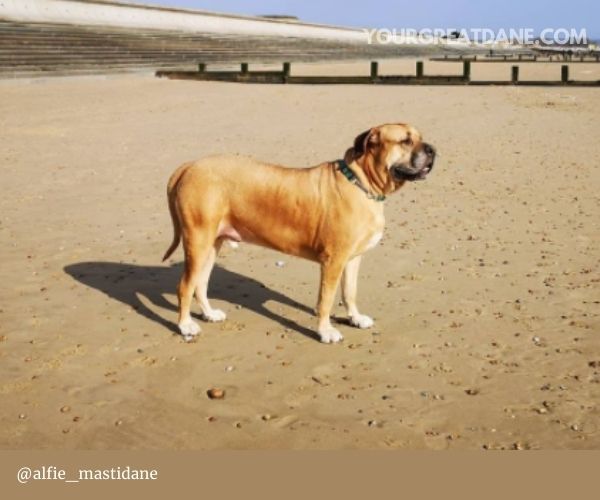 Overall, Teddy is a very independent and confident dog. He likes to be treated as equal and will definitely question authority. I think this is the Bullmastiff part in him. If you are planning on adopting a Bullmastiff Great Dane Mix, you definitely need to be ready to the dog possibly having quite a strong personality. As an owner, you’d need to be a strong person as well, somebody that can be a leader for the dog.

Our Bullmastiff Great Dane Mix is an excellent guard dog. That, too, I think, is a Bullmastiff trait in him. I don’t know if Great Danes are generally guarding dogs. But Teddy definitely is. He is neutral towards strangers when we are out and about. But on our territory, a stranger is always someone he will be highly suspicious of. Even if it’s someone we know and the person has been introduced to the dog, Teddy will still be very cautious around them and will not necessarily become friendly. He just accepts that there is his family, and then there is everyone else and that his family and his home need to be guarded and protected at all times. 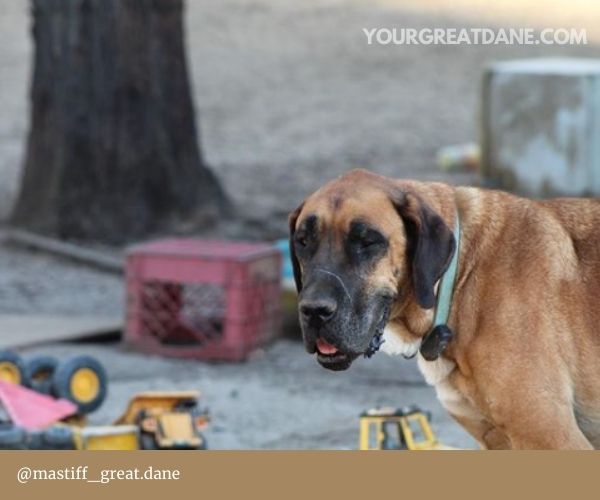 With us, the owners, he often acts like a big puppy though. He is definitely never aggressive towards us, although he can be stubborn. But mostly he just wants to play and be petted, and then play some more. He is very good with kids. He knows they are smaller and weaker than him and would never hurt them. Of course, we never let him near other people’s kids as you never know what could happen. 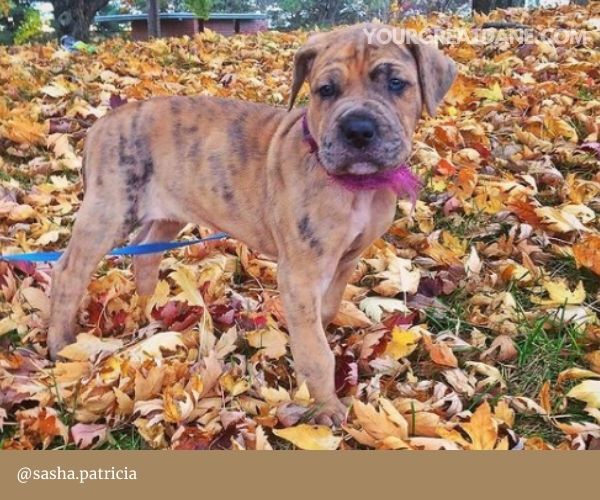 Our Bullmastiff Great Dane Mix is quite friendly towards other animals, including cats. He is even quite neutral about other dogs unless it’s another male. In that case, Teddy can become quite territorial. But he sometimes plays around with other female dogs just fine. He wouldn’t let any dog onto his territory though without a lot of growling and barking, and we generally try not to let other dogs come close to our home just in case.

We raised our Bullmastiff Great Dane Mix as we would any puppy for a while, but we tried to maintain the importance of socialization, so one of us would take him on long, exciting walks every day. This would always involve exposing him to as much of the new environments, people, other animals, sounds and sights as we possibly could. We also played with him lots, took him to the park, etc.

He is a very strong, active dog. He has lots and lots of endurance, so long hikes were just up his alley. 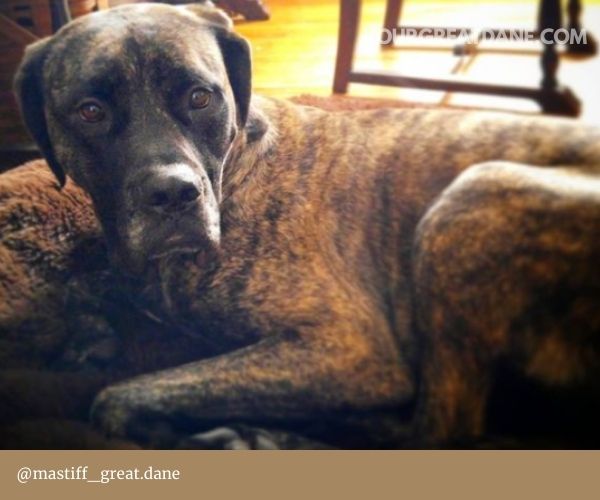 We found that Teddy is always in the center of attention wherever we go. People will always ask us about him, what breed he is and whether they can pet him (which we usually discourage, because, as I said, he isn’t always very excited about strangers).

After Teddy was about 9 months old, we decided to do some work with him under a watchful eye of a professional dog trainer. Simply because we saw that he was getting bigger and stronger and that he was a type of dog who wasn’t going to be very friendly with strangers. We just wanted to be responsible. After a few months with a dog trainer, Teddy became much more obedient and controllable. Which was good, because he just kept growing bigger and stronger! 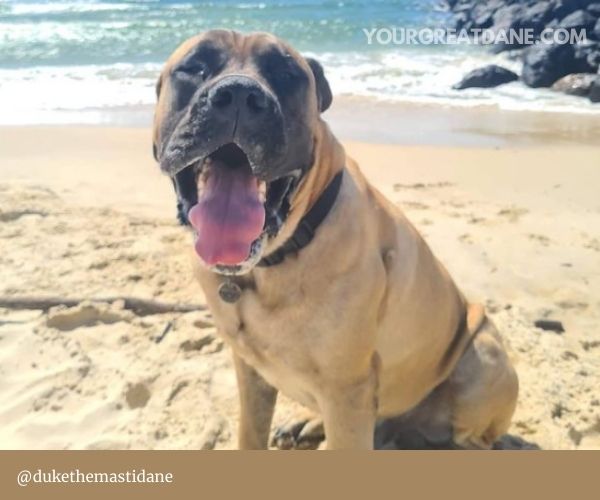 He is still a very confident, self-directed dog. He makes his own decisions and will not just blindly follow whatever we tell him to do. He is very smart though. He feels our mood and our intentions very well. Sometimes it’s as if he knows what we are doing or where we are going before we even do it or go there, he is just so perceptive. I think he also understands quite a few words, so sometimes he literally understands us.

Still, taking care of this large, strong dog is a great responsibility. We have a schedule and do everything according to it. He is supposed to walk 5-10 km a day and we try to do it every day. Sometimes it’s hard because we are all busy professionals, but we make an effort and one of us will wake up earlier specifically so we can take Teddy out for a walk.

Teddy doesn’t do very well in hot weather. He will hide in the shade or swim in the pool if he can, or even retreat into the house! He also doesn’t like it when it’s too cold either. He prefers moderate temperatures I guess. 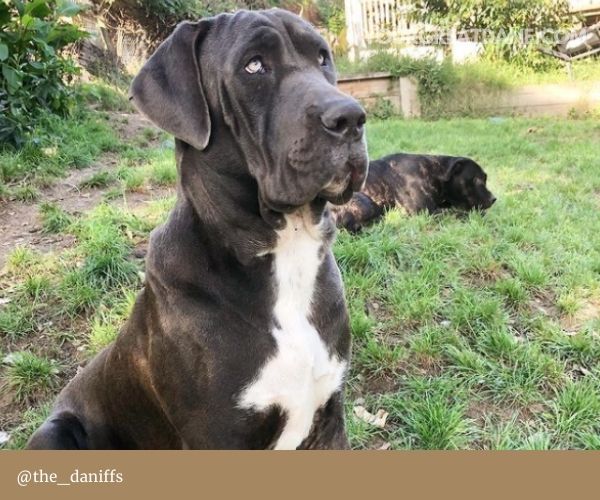 When we first brought Teddy home, it was quite stressful for him, so for quite a while, we had a bit of a potty problem, where he somewhat regressed in his potty training and would do his thing in the hallway, as if it was outside. It took us a few weeks of trying to teach him to only go outside before that behavior settled in again.

We tried to be very encouraging: treats and pets and kind words- all of those seemed to have finally worked. Very soon he realized that he only had to whine a little bit under the front door for us to take it out to pee and that he’d get his treat once he was done.

I’d say this “late” potty training was probably the more challenging time with Teddy, after which it all got much easier. Today, we just do a 40-60 minute walk every morning and his toilet is taken care of and he is a happy dog.

I would probably not recommend this dog to just about anyone because it is a large, strong, stubborn dog who needs a very strong owner to be honest. He is fantastic: loyal, affectionate, intelligent and we love him to bits.

But you will need lots of confidence, strength, and willingness to work with your dog to really make it work with such a large, strong mixed breed as Bullmastiff Great Dane Mix. If you are a new dog owner or aren’t confident in your skills as dog owner, you might find better success with a simpler breed.